Book review: Estuary Out from London to the Sea by Rachel Lichtenstein 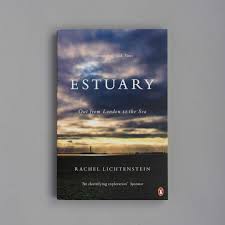 This book called out to me from the London section shelves at Camden Lock Books and appealed because the Estuary is a part of London I have driven over and seen but not learnt too much about.

Everytime I get to experience the joy of Ikea over at Lakeside I travel back on the M25 and the bridhe over the river with views of commercial ships, It always stirs up thoughts about the river and my lack of experience wandering along its banks further East than Woolwich.

This book starts as a tale of artists enjoying the Thames from different perspectives, with the author joined by film makers, musicians and other artists. Those few days on the Thames sparks Lichtenstein's interest in delving further.

She lives in Leigh-On-Sea so already has a connection with the Thames, which also goes back through her family. That sense of families living and often earning a living from the sea is a constant theme. She meets fishermen, sailors and eccentrics that have been drawn to remote islands and sea forts. Throughout the book there are photographs that help share in the experiences she is describing.

But this is not just an account of various exhibitions along the coast and onto the water. There is a real sense of history flowing here with the past wrecks having a story along with the Second World War sea forts and defences. This is a river that continues to evolve and the controversial London Gateway Port is the latest change and threat to the river. The deep dredging needed to help the massive container ships get to the port has caused ripples to be felt in the ecosystems of the river and those that work with them.

From the comfort of an arm chair you get to meet some of the characters of this estuarial world and when Lichtenstein describes the river there is a real sense of danger. her final expedition includes being stranded on a sand bank and the weather, sense of historical precedent for what could happen and the brilliant descriptions of the sea conditions take this book above a mere travel journal.

To many people the estuary is an alien world. It is at the meeting point of river and sea and it is a middle ground that many overlook as they travel one way or the other. But it is populated by people that have stories to tell and although there is a sense that in many cases their ways of life are becoming restoration projects there is still hope.

The river that has supported London for so long continues to do so and although the future is not clear the book does end with a sense that the estuary will adapt and more chapters in its story are going to come.