"Psychogeography: The study of specific effects of the geographical environment, consciously organised or not, on the emotions and behaviour of individuals," definition from the International Situationiste movement.

This is a useful guide to an idea that is a much literary these days as it was originally political.

With roots in the works of Defoe, with his plague year trawl through London, and Blake's thoughts about London and Jerusalem, the idea of charting and reacting to an environment went political with the situationist movement in the 50s and 60s. Figures like Guy Debord set about defining psychogeography and underlining the idea of people using it as a tool to find their own space, to create something new.

But in a modern world which seems to work against the pedestrian it has become less about trying to change the environment than sharing a reaction to it.

That's not to say the current psychogeographers do not bemoan modern planning and Sinclair was particularly vocal about the development of the Olympic Park and there has been plenty of criticism of the way Thatcher changed communities during her time in office.

But as Michel de Certeau noted in the 80s things had started to change and even experiencing the environment was becoming a varied experience.

Voyeurs look down from the sky scrapers and walkers are down below. Psychogeography is about giving the emphasis back to the walkers. The vouyeur loses the individual and sees the city as a homogeneous whole.

Technology is working against the walker surveillance and closed areas etc as a result the novelist and poet not the psychogeographer who is able to capture the emotions of a city.

London has again become the centre with JG Ballard, Iain Sinclair and others.

Walking is again being seen as a tool for the writer. If someone wants to immerse themselves in the city then they need to do it on foot.

My only concern, which isn't dealt with in the book, is that not only has modern technology made it harder for the modern psychogeographers physically getting in touch with the ground but also in terms of having an open mind.

One of the themes of the book, whether it be about London, Paris or New York, is that psychogeographers can somehow find secret parts of the city and unlock hidden truths.

In the age of social media I find it hard to believe that rose secrets would remain so for very long or that it would be possible to walk to a destination keeping an open mind to allow the feelings it sparks to be felt genuinely.

In summary this is a very useful guide to the main ideas and people involved with psychogeography. Very interesting for anyone who has read Ballard, Sinclair, ackroyd or has an interest in major cities and a passion for walking in them.
Posted by Simon Quicke at 11:23 am 3 comments:

Book review: Dottings of a Dosser by Howard Goldsmid 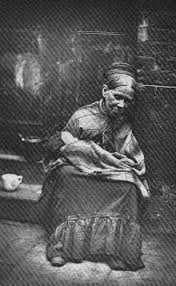 I have been reading The Worst Street in London by Fiona Rule, which is about Dorset Street in the Spitafields area.

One of the main reasons why that street and the neighbouring area went downhill in the Victorian times and became such a place linked with vice, poverty and crime was because of the lodging houses that dotted Dorset Street.

Lodging houses were places where people that could not afford weekly rent could pay just a few pence for a night's lodging. They were desperate folk that spent their waking hours trying to scrape together the money for the night. In theory there were rules that governed just how these lodging houses were run, but in reality people were packed in to foul smelling rooms so landlords could maximise their takings.

In an effort to get a glimpse of what this world was like I discovered the useful Dottings of a Dosser, which saw Howard Goldsmid go undercover to find out what these places were like.

Dressed in his tramp gear the 19 year old Goldsmid bravely set out to share his experiences of spending some nights in the most notorious lodging houses.

The lodging house is not just about the beds lined up next to each other in a stuffy room but starts downstairs in the communal kitchen area. Here the characters emerge with drunken couples fighting, old men sharing their survival wisdom and shocking tales of families struggling with infants in that environment.

Goldsmid rarely lasts more than until the early hours in rooms that are so stuffy and toxic as a result of the foul smelling drunken men that you can really sense the terrible atmosphere in those places. There is one room where his desperation to open the window and breath in fresh air is tangible.

The upshot of his adventure is that he concludes that the law is failing because it is not being observed and enforced. He also warns that people in that situation will surely not stand for it for ever and fears there could be a revolution.

The language is of its time and the references are in the context of the 1880s and the author would have expected the audience to have known those. But it is very readable. The decision he makes to go to different parts of London make sure that any sense of repetition is avoided.

This is an ideal companion to any reading into the state of the East End in the 1880s. It provides a first hand account of a real world that is far more shocking than fiction.
Posted by Simon Quicke at 12:41 pm No comments: 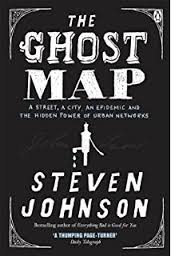 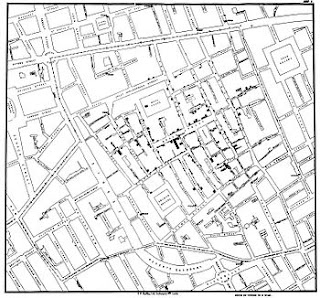 Last year I enjoyed Steven Johnson's series about where do great ideas come from- How we got to now, which was shown on the BBC and so already had an idea of who he was when I saw his name on the spine of this book.

Johnson is fascinated about how great ideas come to fruition and is a keen advocate of the theory that the big breakthroughs often come on the back of smaller ones. the concept of a single genius enjoying their light bulb moment is more of a fiction.

The same is here with it taking the efforts of John Snow and Rev Henry Whitehead to crack the cause of the cholera epidemic that ran through Soho in 1854.

Most people have a rough idea of what happened with Snow discovering that it was the drinking water that was the source of the disease and getting the pump shut off that had been spreading cholera.

But getting to that point took a long time and Snow was going against the consensus that diseases like Cholera were airborne.

What clinched the argument for Snow was his dedication in mapping the spread of the disease and finding the Broad Street pump had been the common link. But it also took the efforts of Whitehead, who initially disagreed with Snow and set out to disprove his theory. As he worked hard to counter the waterborne theory he managed to reinforce it by knocking down his own objections. It was Whitehead who found the original cholera case and traced how it found its way into the water supply.

The legacy of Snow's efforts were profound not just in the sense of linking cholera to water supply but also the way he mapped the spread of the disease. His Ghost Map is something that has been mimicked ever since and helped change the way scientists visualise data.

This is a story of the hard working hero plodding around the streets of Soho after working all day as a doctor fighting the establishment to find the real cause of the cholera outbreak.

It is a story well told but my only criticism is the sense of repetition of the main arguments. I got it the first time but there seems to be a fear from the author that unless he really spells it out the main points might be missed.

But that is a minor criticism because overall this book manages not only to share the story of what happened in 1854 but also the legacy. Snow's techniques combined with the internet, social media and the latest mapping techniques are being used right now to save lives. That is a profound legacy that has lasted well beyond the original cholera outbreak.

Posted by Simon Quicke at 12:21 pm No comments:

I must confess I have not quite finished this book but wanted to get some of my thoughts down about it before I forgot them.

Psychogeorgraphy is something that anyone who has read Iain Sinclair or Peter Ackroyd will be familiar with as it infuses their ideas of the history and development of London. But what exactly is it is perhaps something that is worth looking at on its own.

That's why Sinclair is such closely associated with it. Most of his books involve waking through an environment and then sharing observations and reactions to that space.

The ley lines stuff is more new age and had been largely forgotten until a 70s revival. The original theory related to the countryside and not so much to the urban environment. Ackroyd has picked up on this idea in London. Sinclair raised the idea Hawksmoor churches were on ley lines and there is some hidden force governing the development of certain areas of the capital.

What appeals most perhaps is the idea that a city can have different emotions - sad, happy, stressed etc -  and if you are prepared to walk through with an open mind and a critical eye then those secrets are ther to be unlocked.

Will post a fuller review when I get to the finish.
Posted by Simon Quicke at 12:02 pm 8 comments: