Book review: All the Devils Are Here by David Seabrook 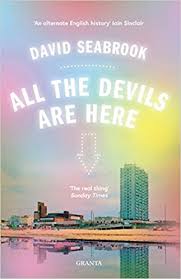 Every time I have an appointment at Moorfields for my eyes I like to pop into Camden Lock Books at Old Street tube station if I get the chance. I have to go before the appointment because afterwards, once the drops have been put in, vision is not that clear and it's slightly pointless trying to squint at book spines.

One of the many things that is good about Camden Lock Bookshop is the section of books it has on London. I tend to hover there looking for something that will provide me with more knowledge or stir greater interest in the City I work and live in.

My eyes were drawn to one book on the London shelf,  Estuary: Out from London to the Sea by Rachel Lichtenstein. I headed over to the till to pay and one of the promoted books was All the Devils Are Here by David Seabrook. The cover blurb and thumbs up from Iain Sinclair were enough to make me buy it on impulse.

In many ways there are two stories being told here. The first is the one contained in the book and the other is about the author. Seabrook appears to have died just a few years after publication. Further research indicates it was a heart attack that took him but he is a shadow over the book leaving unanswered questions.

He starts a trip through some of the seaside town of Kent with reference to some of the literary, political and film stars of the past that were associated with the different towns. So you get Dickens on Rochester and Moseley on Broadstairs. You end with Charles Hawtrey the Carry On star in Deal.

But this is not just a normal trip down memory lane. There is a sense that place influenced person and the same factors are still at work today.

As he retraces the 39 Steps and John Buchan the same sense of secrets, dangers and plots oozes through modern day Broadstairs where buildings are off limits and neighbours spy on strangers.

As he goes through Kent there are moments that made me laugh having been to some of these towns and his descriptions of Rochester and Chatham were sharp.

"8 June 1870, the date of Dicken's own death, is where Rochester's history officially ends..."

"Chatham is a long time dead, killed off on 31 March 1984 when the Royal Navy, a presence for more than four hundred years, pulled out of the dockyard."

By the end there is a feeling that Seabrook himself has become immersed in the story. The devils that he has described, from mad painters and fascists, have caught up with him and he is being pursued by them. I felt there was a suggestion by the end he had even become one of them. Would people be talking of him in the future in the way he had described some writers of he past.

Of all the aspects of this book the way he described a lost world around the time of the 1950s was the one I found most interesting. The Empire was dwindling and those that lived literally on the edges of British society were forced to return to a place that they could not really call 'home'.

Glad I did pick this up and it will probably lead me into Seabrook's other book about the 60s murderer in West London, Jack the Stripper. He tees it up towards the end of this book with some overlap that acts as a warm up for that other work.

Now though it's time to turn to Estuary before I get the call to head back to Moorfields and my next check up.

Posted by Simon Quicke at 5:06 pm No comments: