Book review: This is London by Ben Judah 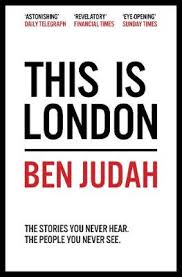 “It’s like this: Russian and Ukrainian people hate Polish and Lithuanian people. Eastern Europe peoples hate Indian people. Everybody hates the black people. Whites hate everyone . . . That’s just the way it is.”

This book is brave and has a story to tell. In the tradition of those journalists who go out there and live the story Judah has put himself into this story sleeping rough with Romanians, dossing down with Latvian builders and getting to know African immigrants struggling on zero hour contracts.

Throughout the book, which takes the reader on a tour of an unknown London, facts and figures are given to back up a picture of a City that in some areas is now dominated by a group of Londoners that would be barely recognisable to most of those who lived here just a couple of decades ago.

What has changed is that the poor white working class communities have left areas of London to be replaced by a mixture of immigrants from Eastern Europe, Africa and beyond that have made the likes of the tube station at Hyde Park and Barking their own as they cling onto a perilous existence.

The message that came out of the book is that London has changed, perhaps permanently, and is now no longer a place that even those living here can quite understand. I have seen some of the changes in nearby Woolwich, which gets a very brief mention, and have started to feel that the London I started to know when I was a student here has maybe gone.

Because Judah speaks to drug dealers, prostitutes and those on the fringes there is a sense of danger often. A sense that the underworld is just waiting for those sitting in the big houses to slip up and then they will come and take them. Maybe that was my feeling but after a while I did start to wonder what the message was coming from this book.

If it is that London has changed and all sorts of invisible people now live here then that came across fairly quickly. It did not need to be so exhaustive. But if it was to try and convey a sense of London from West to East, North to South, changing with traditional Londoners heading for the hills then it also did that.

Maybe the readings of this book would differ if you lived in or out of the capital but for me there was almost a moment of giving up and wondering if it was worth staying here. If it has got so bad then why not just pack the bags and exit like so many others appear to?

London is changing and this book provides a snapshot of what is going on. But just like some of those other great exposes the world remains fluid and this is already becoming history. It's important to recognise that London is so mixed, not just in races but in terms of opportunities, but some of the characters here will not stay as permanent fixtures.

You already sense that this is a book written pre-Brexit and the sense of tension at the prospect of more Romanians and Eastern Europeans coming into the capital is one that is already changing. The Polish builders who have lived opposite me for 15 years are packing up and leaving and the Romanian family at the end of the street have sold their house and are moving on.

Other groups will come into replace them and it is perhaps as a snapshot of an ever changing City that this book will take its place alongside other records of the past as a guide to what it once looked like.

Judah has guts and can write with pace and in a way that challenges the reader to open their eyes that bit wider to see what is often not seen. If this can make some of the invisible visible then it will have done its job.

Book review: The Fall of the House of FIFA by David Conn 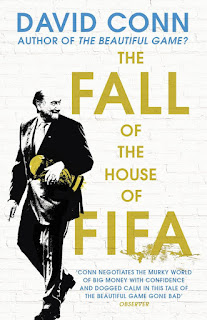 “We who have loved football all our lives do not want to believe that those who run the game, on their manifestos of doing good, are this corrupt and rotten,  and so marinated in greed.”

When a World Cup is awarded to Qatar, a country without any real record of football and a climate that makes playing it in the summer almost impossible, you sense that something in the global game is not right.

This book unpicks the story of the spread of corruption that spread across FIFA over decades and meant that most of the organisation's top representatives were making a side income from back handers and bribes. Against a backdrop of a FBI investigation and revelations that exposed the depth of the corruption this book reveals that the culture of corruption has long been steeped in the organisation.

If you had to point the finger of blame at anyone other than the individuals involved, and some of those like Chuck Blazer and Jack Warner are almost cartoonish in their villainy, then it would have to be television. The arrival of TV rights and the ever increasing sums of money that has gone with it have created the opportunity for corruption.

The mixture of sponsorship and TV rights were sources of income that would be paid to be involved and film World Cups but there was also the opportunity for corruption to come as a result of the structure of FIFA. With individuals holding influence over the votes for World Cup host cities and the President role there were always going to be chances that their decisions at the ballot box could be purchased.

Conn unravels a story that sadly got more depressing the deeper he went into it. The fact that Sepp Blatter appears to be able to shake-off the worst of the corruption allegations makes up very little for the numerous country FIFA bosses who did admit to taking bribes.

The suggestion that a new president at FIFA has introduced a fresh broom and a chance for the organisation to put the past behind it is also pretty well destroyed by Conn revealing the greed over salary that Blatter's successor displayed.

FIFA also appears to have been fairly consistent at neutering any investigations and attempts to clean up the organisation and stem the excesses of the past.

Reading this is not always easy because it clearly quotes a lot of legal documents and in order to make sure it does not fall foul of the lawyers keeps the text and the accusations very clear and dry. But there is enough drama here to make it keep you wanting to read on until the end.

My love of the game is becoming harder to maintain because of the influence of money and the billions pumped in by TV rights is also something that echoes in the Premier League. It's all a long way from kicking a ball around in the back yard and a few more books like this and maybe I too will become like to grey hairs in the crowd moaning about the good old days when everything seemed more simple. The tragedy is that as the case of FIFA shows you have to go back quite a way to find any good old days.