Dipping into some Leonid Andreyev 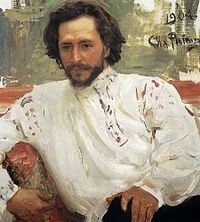 After deciding to dip into Project Gutenberg and see what was there, and to postpone getting bogged down further in the Dostoyevsky I'm trying to read, I downloaded The Crushed Flower and Other Stories by Leonid Andreyev.

It's shaping up to be quite a diverse collection of short stories with different techniques used here to cover such themes as adultery (The Crushed Flower), love and faith (Love, Faith and Hope) as well as the very short tale from the view point of a snake (The Serpent's Story).

The serpent tail did make me think of Bulgakov's Heart of a Dog, in the sense it takes the reader into an animal's mind. And I have to confess thinking of Sue Townsend's Adrian Mole series when reading The Crushed Flower, because it has that ability to show the reader an adult world through the eyes of an innocent child.

There are some great descriptive flourishes and you sense that this is a writer on a bit more of a mission to use literature as part of a political dialogue that was moving on towards revolution.

I'm only a few stories in to the collection but did want to share some initial reactions, which are favourable. Not everything he works but the vast majority does and you find yourself being drawn back to read more and wishing the tube journey to and from work was just those few stops longer.
Posted by Simon Quicke at 12:32 pm No comments:

A short introduction to Turgenev

In a last ditch effort to try to have a go at using an e-reader I fired up the Nook on the tube to work this morning and taking advantage of some Russian short stories downloaded a while ago from Project Gutenberg managed to do a spot of reading.

What has out me off using the Nook up to this point has largely been the price of ebooks and the mixed experience of reading digitally. It still feels unnatural and it was only because it doesn't feel right to dump the Nook without giving it a fair go that I have chosen to use it today.

Anyway the upshot of it is that I was able to read a bit of Ivan Turgenev, who is an author I have not really dedicated anytime to before. I own some of his books but there has never really been a moment when they have been read. So today gave a chance to start to rectify that.

Mumu
This short story contains a great deal of the classic ingredients of great Russian literature. A central character of a pesant that is abused by his rich mistress. First the deaf and mute Gerasim is taken out of his beloved country and moved to Moscow at the whim of a lady who wants to use him as a watchman and courtyard sweeper; Then he falls in love with one of the laundry maids but again the mistress uses her power to force the girl to marry a drunkard in an attempt to get the man on the straight and narrow; Finally he saves a dog, named Mumu, and it becomes the love of his life before the same Mistress demands that it is killed because the barking keeps her up at night.

There is a great deal of tragedy and the story exposes the slavery conditions that most peasants found themselves subjected to by the rich from the Cities. Turgenev chooses a deaf and mute character because the man can only express his feelings through physical movement and the setting of his expression. But in many ways the peasants were mute when it came to talking of their own lives and any attempt to change things would have fallen on deaf ears.

It's one of those stories that you hope doesn't head the way it does but you keep reading and rooting for Gerasim because of the core values of the man to be true to himself.

It certainly would make me want to read more by Turgenev and I hop to in the next few weeks.
Posted by Simon Quicke at 11:51 am 1 comment: