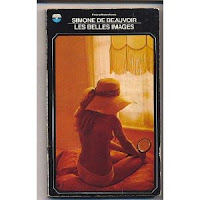 "'I tell you what, we'll talk about it tomorrow. But if you know any unhappy people, we'll try to do something for them. You can treat sick people, give poor ones money - there are masses of things you can do.'
'Are there really? For everybody?'
'Dear me, I should cry all day long if there were people whose unhappiness couldn't be cured at all.'"

The idea of choosing this book as a holiday read was that by the time I got to Paris I was reading about Parisians. The problem was by the time I had got to the [point when I pitched up on a campsite in the Parisian suburbs the characters of this book had quite put me off heading for the Champs Elysees.

They are meant to of course as Simone de Beauvoir portrays the vacuous world of the rich in Paris. in a way that leaves you despairing of their lack of connection with the real world. They search for happiness and fulfilment among the top class restaurants and their weekends away in the country but don't know how to respond when someone brings real pain and horror into their lives.

So they protect the bubble by running away from the news, banning their children from reading newspapers and keeping the conversation to safe naval gazing subjects of conversation.

At the heart of the story is Laurence who we are told has had a nervous breakdown five years previously and then slowly heads towards another. What sparks her off is her daughter mentioning that she is unhappy and upset by the suffering in the world. Despite the best efforts to stop her from reading newspapers the influence of a more worldly friend is difficult to stop and so the seed of unhappiness is planted in the apartment leaving the ambitious architect father and the fragile mother to cope with the consequences.

At the same time a parallel story displaying the vanity and shallowness of the older generation is running with XXX's mother being dumped by a rich aged boyfriend because the 56 year-old fancies getting involved with a 19 year-old. The mother screams at her daughter that a woman without a man is nothing and highlights that even someone who is apparently successful believes that society cannot view her in those terms unless she has a rich man on her arm.

The world this book refers to is sadly still probably there and certainly the world of the vacuous rich is one that you can certainly imagine still being like this. What keeps you reading isn't any sympathy for the characters but a sense of fascination that something so natural and innocent, the idea that not everyone is happy, can cause such distress. It proves, if it needed underlining, that regardless of your wealth and success you cannot cocoon yourself from reality.

There are also some messages here about the position of women in society, with the mother showing a desperation to be with a man in order to be accepted by society and the attitude towards Laurence as one verging on the patronising and bullying by some of the men in her life.

Not the most enjoyable read but then it was never designed to be and although it's looking a bit old in some respects the world she took the scalpel to is still there and still deserves to get this sort of literary examination.
Posted by Simon Quicke at 4:37 pm 3 comments:

"For two days his company had been under the command of Nordbat, the Norwegian-Danish-Swedish battalion that had been billeted around Tuzla, initially for a period of two weeks. Who could say whether it would stop at that? Links with the battalion in Srebrenica had been temporarily severed. Just as well: from now on he was more or less his own boss. He was king, King of Tuzla."

Reading this story of life on the inside of a UN mission to Bosnia reminded you of that news footage where the blue helmeted troops looked so helpless in the face of a conflict that tore the former Yugoslavia apart.

That sense of frustration is evident in this account of life on the sinde of a Dutch unit sent to police an airport in an area disputed by rebels fighting out differences which went back generations and were bogged down in the complex differences of race and religion.

At the heart of the story is a solider, Tijmen Kleide Gildekamp, who through his experiences serving under the UN banner becomes disillusioned with the army life and in the hours of boredom punctuated with brief hair raising moments of fear he gets the chance to reevaluate his life.

It is a life of service and duty but one that is pretty empty of friends and real satisfaction and even as he sits wearing his King of Tuzla t-shirt looking out across the pock marked shelled runways he struggles to find sense in the military manoeuvres although he does start to get a sense of what he needs to do with his life.

The book benefits from the autobiographical knowledge of the author and the confidence he has describing not just the experience of serving in Bosnia but the background to how you get from a student at military school into the position of leadership. The close knit world of the army is clearly one that people struggle to leave and as Tijmen walks past the barracks and recalls his past there is that sense of regretting lost time not just spent in the army but spent making the decision to leave.

The description of the tension and almost anarchy of the front lines and the tightrope that the UN soilders were treading is brilliantly done and even those with no sense of history of the recent conflict will understand the difficulty for troops that were seen as an irritant and unwanted by both sides.

It's such a well worn phrase but in many respects this is a coming of age story that charts the journey of a man who discovers himself as an individual rather than just a cog in a machine and discovers that real bravery isn't just facing up to mortar shells and bullets but making a break with a life and a past to go off and do something different.

If you want proof that literature has the power to change lives then this illustrates it on every level.
Posted by Simon Quicke at 5:20 pm 1 comment:

book review: How I Won the Yellow Jumper by Ned Boulting

"I have been told though, by a friend who was watching in embarrassed disbelief in a house in Chelmsford, that I uttered words like 'some sort of thing with his bike'. I followed this up, apparently with the killer line, 'kissing goodbye to his chance of winning the yellow jumper'.
Yes, the yellow jumper. That's what I said."

The Tour de France can feel like an alien world. Talk of different colour jerseys, general classification times and numerous riders and teams can put off all but the most determined from finding out about it. But as Ned Boulting's experiences show once you make the effort to understand the sport you are hooked.

There are ups and downs, with doping scandals continuing to feature in the sport, forcing Boulting to add an epilogue in response to the revelations that last year's winner Alberto Contador had tested positive, but there is still more to admire here than to scorn and the riders and the logistics of the Tour are both monumental and deserved to be praised.

What Boutling does is shows that it is possible to get into the sport as a complete novice and then build up a knowledge and a love of the sport fairly quickly. His introduction to commentating for ITV starts with a cock-up, hence the book name about jumpers and jerseys, and manages to stay in a light-hearted vein until the end. He is flanked by former professional riders and legendary broadcasters but he manages to find his own place in the world of cycling.

The behind the scenes book reveals not just what it takes to film the Tour and work on it but what the event means to the people of France and the way the world changes for those three magical weeks in July. It made me smile and it made me share a frown as Boulting reveals his disappointments over doping. But importantly it provided more details of the Tour and revealed just why this event is so special.

Books about sport are incredibly difficult to pull off because they either appeal to die-hard fans who dissect them for flaws and unknown nuggets or are so generalist they don't add any value to those who share an interest and want to know more.

Boulting pulls it off and his technique is not just around his use of humour but his use of biography. This is his story of how he fell ikn love with the Tour and although we can't all commentate and get taken round in a car with a film crew that essential journey from bike novice to fan is one that we are all welcome to head down.
Posted by Simon Quicke at 4:26 pm 3 comments: