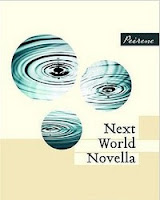 "There were not many, barely three pages. Doro's final set of comments began on the the third page. He could cope with her comments now too. He put all the pages in the correct order. And then? He would be done."

Big ideas don't have to be told in big books if the writing is as skillfully delivered as here in Next World Novella.

A professor wakes to find his wife has died of a stroke in the evening and he takes in the shock of the situation reading through the last notes that she was editing. As she usually edited his reports it is his material she was found slumped over.

But the work that Schepp finds his wife Doro was concentrating on is an old story that he wrote years before and never published. The story about a drunk who hangs out in a bar lusting after a waitress mirrors the professors own fixation with a waitress in a bar he stumbled into one afternoon after eye surgery.

What becomes clear is that the wife knew about the affair, at least the dream of an affair that was harboured by her husband, and it drove a wedge between them.

One of the promises they made was to enter the next world together and to hold each other's hands as they swam across the lake of the dead to try and reach the land in the distance on the other side. That promise is ruined by the secrets Hinrich kept from his wife.

That story contains enough food for thought but the way the novella ends leaves you with the distinct impression that even near the end all it would have taken is for Hinrich to have shown a bit of notice and the love would and could have been rekindled. Failing to listen and failing to notice are the real crimes of the lutsful professor.
Posted by Simon Quicke at 3:56 pm

This is book is getting a lot of coverage in the blogworld .