book review - From a View to a Death - Anthony Powell 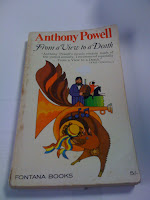 "Mrs. Brandon did not answer. She had ceased to fan herself with the Illustrated London News and now she lay back on the sofa quite still. Her eyes remained open, but they stared in front of her at nothing in particular. Mrs Dadds made preparations to leave the room. She was an unobservant woman and did not notice that her mistress was dead."

Cards on the table I like Anthony Powell. I know some people think of his Dance to the Music of Time as an upmarket Eastenders but it charts a world that has gone forever blown away by the bombs of war and the decline of the aristocracy. But From a View to a Death is slightly different.

It contains all of the Powell hall marks of characters from country houses that have wealth and eccentricities that are designed to make the reader laugh. The problem is that those characters were probably seen with some fondness back in 1933, when this was first published, but now seem not just vulgar but irrelevant.

The world inbetween the wars was one when those that had served in the First World War got to stroll around and talk about the war and the need for everyone to be a gentleman. But the spectre of Nazism was looming when being a gentleman was not going to be enough and those in houses that were already in decline were facing serious problems.

But this is written before that was clearly happening. In a nutshell an artist, Arthur Zouch, who is neither successful or a hit with the ladies exploits the hospitality of a family in the country setting his sights on an engagement and marriage into a comfortable life in the country.

He finds away from London he manages to start a couple of affairs with not just his intended target but another pretty girl in the village. Set pieces about a pageant and hunting are played out as the characters move through a vanishing world. What you sense clearly is how boring it is to be part of that and how protected they all are not just from reality but ever being told about it. Butlers might grumble about them but they dare not say it to their masters faces.

The two problems for me were firstly that the humour didn't carry through 80 years and the scenes about transvestitism were just awkward when presumably they were meant to be rib tickling.

But secondly the main character of Zouch never really worked for me. Was the reader meant to like him as he broke hearts and schemed his way through engagements? Were they meant to feel pity when the family he had chosen to become part of closed ranks and made it difficult? I felt neither and as a result found it lacking any real engagement.

As a piece of social history charting a world that has largely disappeared then it is worth a read but those heading for Powell would be wiser to go for the Dance rather than this.
Posted by Simon Quicke at 1:58 pm

be while till I get to this want read the 12 dance to books and just on book 2 lol ,seems to have dated badly ,all the best stu