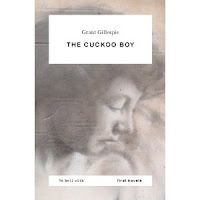 Having finished The Cuckoo Boy, written by Grant Gillespie, it seemed like a good idea to interview Grant to find out what inspired him to write the book and what he has planned next.

Thanks Grant for taking the time to reply to my questions and a full review of the The Cuckoo Boy will be posted tomorrow.

Part of my inspiration for the novel was the Bulger case, and in particular in the responses of the public and the politicians. I was really shocked to read that John Major decreed that "Society needs to condemn a little more and understand a little less." When we're vindicated in turning those who have committed crimes into 'the other', (eg the bad seed, the little monster, the worthless, the freaks) then we are also given permission to avoid looking at ourselves and our society. I certainly don't profess to have any answers, but in The Cuckoo Boy I wanted to pose the question: 'Given the wrong set of circumstances, what child isn't capable of violence?'

Q. In places the book makes quite uncomfortable reading were there times when it was difficult to write, particularly scenes like the torture of David in the woods?

It sounds like a cliche but I find that once I am underway with a novel the characters take on a life of their own and they dictate what happens next. I tend to have an arc in place but then the narrative often veers off into new areas, and I tend to let that happen, especially in the first draft. Some people who've read the book have said it reads like a painfully slow car crash, and I think that that may be because, like the reader, I too was reluctant to reach and deal with the parts which were tragic and distressing.


Q. I found it almost impossible to sympathise with James but as the book progressed my dislike of his mother grew in tandem with sympathy for Kenneth. Were you trying to accentuate the fact that Sandra was as damaged as the son?

To my mind, and of course everyone responds differently to the writing, all three members of the family are - to a greater or a lesser degree - victims of their own natures and the limiting domain that they inhabit. I believe (or I'd like to believe) that if Sandra had been better equipped, if Kenneth had been stronger or if James had been raised by more receptive people, then most of the incidents in the book could have been avoided.


Q. David the imaginary friend is quite disconcerting where did the idea from him come from and although its an inevitable question did you have one yourself when you were a child?

I did have an imaginary friend, also called David, in fact. And he was very, very real to me. Likewise, in the book, David is very real to James, but I also wanted to have David as an ambiguous figure. He could be James' dead twin, he could be his negative side, or he could just be a child's imaginative plaything. That's all open to interpretation. I made decisions in my head, but I wanted to leave it vague in the story.


Q. How long did it take to write the book and how do you write - a computer or paper and pen person - and how does it feel to have got to the end and now seeing it in print?

The Cuckoo Boy took me about a year to write, but the editing and publishing process took much longer. More and more I tend to write on the computer (now I have a laptop) but in the past I would write the first draft on paper in pencil and then the second draft as I typed it up.

I can't begin to tell you how exciting it is to have the book in print. To be honest I write because I love to write. On one level I never thought that my writing would see the light of day - rather than the dark of drawer - so it's thrilling that it's out there. I'm also an actor and as an actor you can't generate your own work, you need other actors and directors and producers etc. Writing is a way for me to keep creative in an autonomous way.


Q. What next Grant? Is James a character that you might turn to again in your writing?

It's funny you should ask, but I did research and start a sequel to The Cuckoo Boy, with James in incarceration, but then I thought that actually James will never be allowed to grow up. He is a child frozen in time.

My next novel, which is nearly completed in its first draft, is called There is the Sea and is about suicide, tsunamis and synesthesia...
Posted by Simon Quicke at 2:33 pm

great interview simon ,what seems a deeply interesting book ,all the best stu