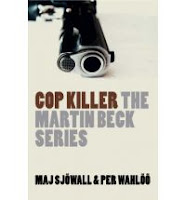 "There seemed to be no one within the police administration capable of grasping the simple truth that violence breeds violence and that, in fact, it was the police who had struck the first blow."

The reason why the crime books penned by husband and wife team Maj Sjowall and Per Wahloo are so enjoyable is because they are not just about crime and detection.

This is a book that takes you back into the 1960s and 1970s Sweden a country that suffers from suicides, gun crime and has a police force that lacks popularity. Part of the problem with the police is of course the involvement of guns and the response from the criminals who have become increasingly violent.

The book starts with just such an example with a petty bank robber who has killed a woman during a robbery because he had taken a gun along to the crime. But quickly the action shifts towards the countryside as Beck is sent to solve the dissapearance and then confirmed murder of a local woman.

In the one horse town Beck finds a different Sweden where the police are part of the community and crime has not taken over society. But even in that location there is a chance for Beck readers to become acquainted with the killer from the first book in the series and the murderer from the third. These figures are there perhaps to confuse and distract as much as to show a dedication by Sjowall and Wahloo to dig back into the rich world they have created.

If there is a dominant theme in the book, which has already emerged in the The Locked Room, it is the amount of time Beck has to spend fighting his superiors and dealing with politics. Crime solving by numbers means that innocent people are going to be sent to prison and Beck and his colleagues are resorting to using their basic police skills to outwit their superiors as well as protect the public.

This book, the ninth in a ten book series, is a return to the form of the first book in the series and by the end you are gladly immersed with the characters that you have come to care about, sympathise with and want the best for.

Onwards to the end which will be a mixed experience as reading these crime books has been great.
Posted by Simon Quicke at 11:51 am

Email ThisBlogThis!Share to TwitterShare to FacebookShare to Pinterest
Labels: book review, Maj Sjowall and Per Wahloo