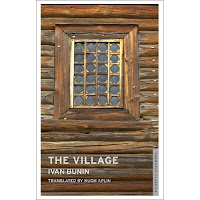 "About the village, it should be, about the people," said Kuzma. "I mean, you say it yourself: Russia, Russia..."
"And isn't Drynose the people, Russia? The whole of it's a village, get that into your head once and for all!"

The phrase about all the world being a village is one that kept coming to mind as the reader was introduced to the idea that Russia is a country that shares the same characteristics across its many miles. In the village there are those that have worked hard to gain wealth and position, those that are feckless and unable to do anything other than live a life of toil and often drunkenness and those that look to positions of power to change their fortunes.

Up to 1905 all of them believed they knew the lie of the land but as revolution threatened to topple the status quo and certainly introduced talk of more reforms and a Duma which would carve up land more fairly there must have been a palpable sense of fear.

Seen through the eyes of two brothers, Kuzma and Tikhon, The Village introduces the reader to a cast of characters that cover most of the usual Russian types. The richer of the two peasant brothers who has become a landowner, Tikhon, who owns property and a store, is envied and admired and spends most of his time worried about what could happen if the rebellion spreads and his property is burnt down.

Kuzma it turns out has had a harder life and in some ways is saved by his brother from a life of poverty but he is much more sensitive. The differences between them are highlighted most clearly over their attitude towards a servant woman Bride. Tikhon rapes her but Kuzma sees her more in a fatherly light even harboring some feelings towards her that cause him great pain when Bride is forced into a marriage.

This is a brilliant portrayal of a world that is ugly and harsh. There is no gloss here with Russian counts and duchesses dancing at balls this is grim life. Mud, millet and misery are the things you are left thinking about. The brother's each in their own way aspire to escaping that drudgery.

But by the end, regardless of whether or not the Duma, the Russian parliament, will introduce changes or not the brothers sell up and plan to escape the village.

But as we know the brutality, harshness and misery of the village is replicated elsewhere and the brothers might succeed in escaping their own specific situation but not Russia.
Posted by Simon Quicke at 2:50 pm

Very useful piece of writing, much thanks for your post.