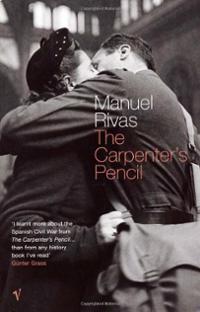 The idea that when you are captive the one thing that you have left is your mind and your memories is the main theme of this book. Along with jealously and hatred the story plays out against the backdrop of the Spanish civil war.

In a nutshell a young left-wing political activist Dr Daniel Da Barca is an eloquent speaker and supporter of the left-wing cause and along with his girlfriend Marisa they seem to be the perfect couple. But jealousy burns in the heart of Herbal who is an agent for the other side and he gets his chance to split the couple when civil war breaks out.

The Dr is taken to a harsh prison and there is punished not so much for his political views but because of who he is. He conjures up images of beauty that lift him and some of his other prisoners out of misery. There is a scene that is unforgettable where he describes a feast of food that manages to comfort his fellow undernourished inmates.

All the time though there is a hostility from Herbal and if anyone hoped that Marisa would give up her love they are mistaken and she goes as far as to attempt suicide. She dreams that she will be reunited with her lover but even her own father is determined to destroy her happiness.

The title comes from the moment when Herbal picks up a carpenters pencil that is dropped by a prisoner on his way to be tortured and murdered, and it lingers in his possession becoming something he uses to draw with. That pencil comes to symbolise the independence of thought that cannot be crushed no matter how ugly the torture.

Told as a story of the past with da Barca returning to a post-Franco Spain this love story is hauntingly memorable. The ugliness that war, particularly civil war, can create allows those suffering from jealously caused by unrequited love, intellectual inferiority and base hatred to flourish. You hold onto the idea that ultimately if you are strong enough the mind can be a refugee. The imagination can be a very powerful thing. As Stalin once said: "we would not give our enemies guns so why should we let them have ideas".
Posted by Simon Quicke at 11:28 am

Welcome back, even if it is only when time allows.

Recently finished the silence & the roar by Nihad Sirees & the protagonist although effectively silenced was still hounded by the security forces because of who he was & represented.