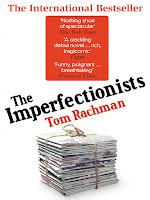 "Typewriters disappeared next, replaced by video display terminals. Overnight, the newsroom's distinctive clack-clack-bing went silent. The rumbling basement presses hushed, too, with the work outsourced to modernized printing sites around the globe. No longer did vast rolls of newsprint slam into the backside of the building in the late afternoon, jolting any dozing reporter awake. No longer did delivery trucks clog Corso Vittorio at dawn as workmen loaded the papers, copies still warm."

Having been attracted to this book because it covers the world of journalism it was with a sense of familiarity that I read of the world of a newspaper facing the challenges of declining revenues and a failure to grasp the importance of the web.

The paper, based in Rome, has seen its readership decline along with its financial fortunes. Set up in the 1950s as a per project by a US millionaire the paper has been handed down from father to son as a weight around the neck for three generations. Nobody seems to know what to do with the paper from an ownership point of view but the financial realities means that the situation cannot last forever.

Chapters arranged to tell you about the different people who work on the paper, from the reporters, sub editors up to the editor and accountants, are interspersed with the history of the establishment of the paper.

In many ways this reminded me of Then We Came to the End with that same feeling of despair and detailing how a corporate environment can shape a person's world. There are the same moments of humour and tragedy but this is perhaps different in the sense this is not linked directly to the recession.

The story of newspapers failing is going to be one that is a theme of the next few years. The world of the web has supplanted the daily newspaper for many readers, looking for the story right now via the TV, twitter and online news sites rather than to wait for tomorrow's paper to tell them all about it. Plus the era of the star columnist, the Keith Waterhouse, is threatened by the blogosphere where there are more voices than you could ever have time to hear.

But in the world Rachman explores what really matters is not just the pounds and pence that drive the media business but the impact a working place has on someone's life. Self-esteem, love and happiness are all tied up with work and in that sense the newspaper industry is just like any other. If anything the decision to place the action in Rome is part of making it more general because you don't identify with the paper as being one you would suspect was one you read.

The moral of the story seems to be around the temporary nature of news compared with the lasting power of love but for many of the characters that lesson is one that passes them by. Well constructed and written in a way that means just as you wonder how many more characters you will be introduced to the curtain comes down and things are rounded off without any loose ends.

I wasn't bowled over by this but as I read it wished the paper described existed a pan european paper be great ,all the best stu

"The Imperfectionists" is that it is like a puzzle that you have to put together in your head to get the full picture. Set against the backdrop of a struggling news office, the story is really about the lives of the staff - each with their own humor and heartache. A top notch book that really makes you think about the human condition.