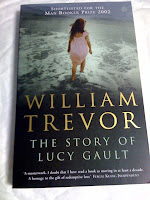 "All this - the house and the remnants of the pasture land, the seashore below the pale cliffs, the walk along it to the fishing village of Kilauran, the avenue over which the high branches of the chestnut tree now met - was as much part of Everand Gault as the features of his face were, the family traits that quite resembled a few of those in the drawing -room portrait, the smooth dark hair."

When people ask why I read one of the answers is that it really does have the ability to take you away from the here and now into foreign lands, eras and into different people's heads. That might sound like the blurb from the back cover of a particularly cheesy paperback but it can be true. If you want an example of when it works and works well then this rather sad but thoughtful story from William Trevor would be hard to beat.

You are gently taken into a rural Ireland of the 1920s where the landed aristocracy face being burnt and hounded out of their homes because of their English connections. The Gault family fall into that bracket because the wife of the head of the household the Everhard Gault, The Captain, happens to be English. The story starts with the captain shooting in the shoulder one of the three men that had come up to the house with the intention of burning it down.

His attempts, via the priest, to calm down the situation fail and the family, husband, wife and their daughter Lucy, face leaving their home. But Lucy rejects the idea and plans to run away. But through a twist of fate her attempts to hide are seen instead as an accidental drowning when her clothes are found near the sea. It is a broken hearted husband and wife who leave Ireland and spend the next twenty years travelling across Europe to try and escape their past.

So when Lucy is found near death but brought back it is frustrating that the family cannot be contacted but of course they are trying to escape completely from the past.

But what Trevor manages to do so well is leaving gaps in which the unsaid manages to fill. So the marriage, although loving, has the potential resentments that had she not been English and had she been prepared to go back to Ireland then...

Under the surface of what can and should be said in that class in that situation in Ireland there are tensions bubbling up which Trevor allows the reader to share. That is where the talent in this story lies because on the face of it, if you were to summarise it, the story appears to be relatively straightforward. What takes it far away from the ordinary is the characterisation not just of people but time and place and the ability to leave some incredibly large things unsaid hanging just to the side of the open page.
Posted by Simon Quicke at 2:38 pm

Thanks for sharing this link, but unfortunately it seems to be offline... Does anybody have a mirror or another source? Please answer to my post if you do!

I would appreciate if a staff member here at insidebooks.blogspot.com could post it.

Thank you, that was extremely valuable and interesting...I will be back again to read more on this topic.

Brilliant website, I hadn't noticed insidebooks.blogspot.com before during my searches!
Keep up the fantastic work!

Boy, I am searching the internet and happen some elevated communications arrange as forums, [url=http://www.olympusds2300.com/]blogs[/url]. Could you hand out me some suggestion?

I loved your blog. Thank you.

I have a message for the webmaster/admin here at insidebooks.blogspot.com.

Can I use some of the information from this post right above if I provide a link back to your site?