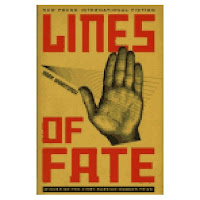 This book was one of those finds in a charity shop that at first you are very please with. The blurb on the cover informs you that this won the first Russian equivalent of the Booker Prize so it is with high hopes you open the covers and delve inside. Mark Kharitonov is always in control of the experience and as a reader you never feel totally at ease in the world he describes nor did I ever really understand.

Maybe that is part of the point about this book – it is clearly meant to be difficult – with a cast of numerous characters spanning two different time lines. But in many places it was just too much like shooting fish in the dark and as a result sadly this review is probably lacking a great deal of astute comment.

What did emerge through the fog was the idea that a student was studying for his doctoral thesis but concentrating on the writings of an author who ended up living in exile.

The author not only lived in the wilderness but lacked some of the basic things like paper and resorted to writing on the back of candy wrappers, which were produced in the factory in the town he was staying in. Some of the thoughts put down on the wrappers are just single lines but they seem to speak to the student many years later.

What also seems to speak to the student is the sense of political doom that the author predicted would happen and did indeed shatter his world as the factory was closed and the estate connected with it looted and destroyed.

But in-between those moments of clarity there are meetings both in the past and present with academics and publishers that meet and influence and try to exploit both author and student. But what they also have in common seems to be a failed love affair that ends with the woman disappearing into the mists of time.

The problem with the book is that it just never gets any easier and even at the 200 page mark you are left flummoxed. I know that there is a larger debate about whether or not literature should be difficult and challenging for the reader but there is also something about it being enjoyable.

I am happy to admit that my reading is not as deep and as wide as I would like and neither is the memory that good (hence why I write things down here to remember) but for me this was one of the most difficult reads of last year.
Posted by Simon Quicke at 7:44 pm